Vulnerabilities with IoT devices have raised the need for a solid and secure firmware update mechanism that is also suitable for constrained devices. Incorporating such update mechanism to fix vulnerabilities, to update configuration settings as well as adding new functionality is recommended by security experts.

This document specifies requires and an architecture for a firmware update mechanism aimed for Internet of Things (IoT) devices. The architecture is agnostic to the transport of the firmware images and associated meta-data.

This version of the document assumes asymmetric cryptography and a public key infrastructure. Future versions may also describe a symmetric key approach for very constrained devices. 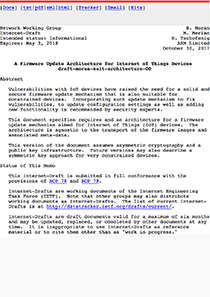